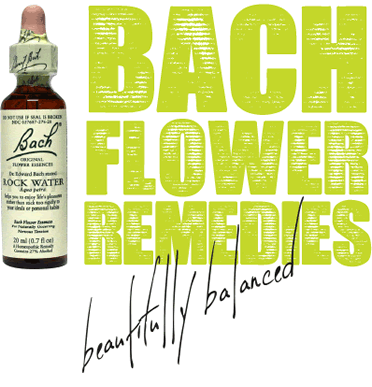 these remedies really do work; I was so impressed I became a consultant!

There are thirty eight individual remedies: thirty six flowers; one spring water and one composite "Rescue" blend.   Dr. Edward Bach discovered all of these remedies, together with the methods of preparing and using them, and developed the system of healing that is today known as Bach Flower therapy.  It was his life's work.

With the exception of the now iconic "Rescue Remedy", formulated specifically for emergency situations, each of the individual remedies matches a basic human emotion or characteristic.  The system is used to restore harmony when emotions or character traits are out of balance, by matching the imbalance with the appropriate remedy.

For example:  Mimulus is the remedy for anxiety or fear about something specific: fear of the dark, fear of heights -  fear of something that can be named.   It is a remedy for an emotion, a feeling.   Clematis on the other hand, is a remedy for a character trait;  it is the remedy for a person whose head is often in the clouds.  Whilst that might not seem to be a problem, the clematis remedy is appropriate if we begin dreaming to the extent that we are not fully in the present moment.  We all need to have at least our feet on the ground, in order to function in the world!

The remedies can be used when our feelings or our personalities become unbalanced, to the extent that normal life is affected.  A healthy emotional life and a balanced personality has a beneficial effect on overall health.  The remedies work in a subtle and gentle way, restoring equilibrium, and the system is entirely natural  and completely safe to use for all the family.  There are no contra-indications and children, the elderly, animals and even plants can confidently  be treated without fear of harmful side effects.

..."the thirty-eight herbs heal gently and surely, and as there are no poisonous plants amongst them there is no fear of ill effects from overdoses or incorrect prescriptions."

All of the remedies come in concentrated liquid form, ready to be diluted in water.  Up to seven individual remedies can be mixed together, giving a potential total of more than  293 million different emotional situations.  Chances are, at least one of those will do the trick!  Even more compelling: Rescue Remedy is also available in spray, pastilles, cream and rescue balm.  Don't be without it.

Edward Bach was born in 1886; a delicate child, but a boy possessed of outstanding determination and single minded purpose. He was intuitive and sensitive, with a spirit of adventure and a readiness for mischief.

There were two driving forces in his life: a love of nature and a deep compassion for all who suffered. It is therefore no great surprise that he would be the one to discover the simple yet powerful system of natural healing that is today known worldwide as the “Bach Flower Remedies”.

Edward Bach qualified in medicine at University College Hospital, London, in 1912 and subsequently took consulting rooms on Harley Street. His career flourished, but he quickly grew dissatisfied because his patients did not always retain their good health and certain chronic conditions hardly ever responded to treatment.

From his observations as a medical student, he had developed a firm conviction that the patient’s personality and state of mind were significant factors in gaining and maintaining health and so he began to consider other methods of healing. He took up a post of bacteriologist at the London Immunity School, and began to develop vaccines for intestinal toxaemia, based on the idea that different people responded differently to treatment, depending on their personality type. These vaccines were very effective and were adopted by the wider medical profession. His work was recorded by the Royal Society of Medicine in 1920, but Dr. Bach remained dissatisfied; there were still cases that did not respond to treatment, and accurate diagnosis was often elusive.

Consequently, he set up a private research laboratory so that he might continue his studies independently, and at the same time took a paid position of pathologist and bacteriologist at the London Homeopathic hospital. After reading Samuel Hahnemann’s *“Organon” he was profoundly impressed by the similarities between homeopathy and his previous work with vaccines. In Hahnemann he had found another who demonstrated that the true method of healing was to treat the patient and not the disease.

And so it was that Dr. Bach turned his attention to the relationship between his own discoveries, and those of Hahnemann. He identified a correlation between 7 distinct personality types and 7 different intestinal toxaemias, and went on to develop 7 homeopathic treatment nosodes accordingly. These were called the Bach nosodes and they were enormously successful and enthusiastically welcomed by the medical profession worldwide. Dr. Bach had established an entirely new approach to healing; an approach that is at the very heart of Bach Flower therapy: diagnosis from the character and temperament of the patient, rather than their physical symptoms.

Nevertheless, the nosodes did not address all conditions and Dr Bach was reluctant to use the products of disease to treat patients. He aspired towards a more holistic approach to health. At the International Homeopathic congress in London in 1927 he gave an address:

“Science is tending to show that life is harmony – a state of being in tune – and that disease is discord or a condition when a part of the whole is not vibrating in unison.”

The Bach nosodes were the foundation of the treatment modality he had been seeking and would ultimately lead him on to the final stage of his quest. His work, so far, had brought him fame and respect amongst his peers, but this had never been his objective. With a firm conviction that the medicine he was seeking could be found in nature, he gave up his lucrative Harley Street practice and left London in 1930 to begin the search that was to end with the discovery of the 38 Bach Flower Remedies.

During the years spent searching for and discovering the remedies, Dr. Bach lectured widely on the principles of this new method of healing. He brought the remedies to the public as they were discovered, the first twelve he described in his book "The Twelve Healers". He continued searching until he was convinced the system was entire and a year after declaring that his search for the remedies was complete, Dr. Bach passed away. His legacy remains: the simple yet profound system of natural healing that is today known throughout the world as the Bach Flower Remedies.

*The Organon of Medicine by Samuel Hahnemann is the foundation text on the theory and method of homeopathy.

Dr. Bach designed the system to be self help; he saw it as being a simple and natural method of restoring emotional balance, to be used easily by anyone.

There is one remedy for emergencies: Rescue Remedy. Rescue is a combination of several remedies and is a general panacea for any traumatic experience. Shock, stress: reach for Rescue. There is no need to dilute it and every reason to feel better.

The remaining thirty seven remedies are associated with a particular characteristic or emotional state. To select the remedy that will be helpful, think about the sort of person you are and the way that you are feeling. More than one remedy may seem appropriate and if so, up to seven remedies can be mixed together at any one time. Choose the remedies that are immediately indicated; deal with the most pressing problem first. As you take that remedy other issues may begin to resolve when the gentle process of restoring balance takes place.

To get started, purchase a concentrated bottle of the remedy or remedies of your choice. The concentrated remedies can be diluted into water in either a glass or a dropper treatment bottle. Ideally, four drops of the diluted solution should be taken at least four times a day for a couple of weeks. The concentrated remedies have a long shelf life and can be used time and time again. Nelsons hold the license to distribute the remedies and both the remedies and the dropper treatment bottles are widely available in shops, online, and from Mrs Osborne. A word to the wise: "beware of cheaper imitations" they are no substitute for the real thing...

The Remedies are primarily a self help therapy, but of course it can be helpful to seek guidance, especially when first beginning to use them. For all things "Bachy" the Bach Centre reigns supreme, flanked on either side by Nelsons and a small but dedicated army of Bach Foundation Registered practitioners.

The Bach Centre is at Mount Vernon, in Wallingford, the house where Dr. Bach lived and worked during the latter part of his life. The Centre keeps Dr.Bach's house open to the public and his books in print. It is an informal and wonderfully hospitable world where you will find people who can talk sincerely about Dr. Bach's work, and of the simple original system that he discovered in the 1930s. It is their mission to keep the system intact, unchanged and available to all.

"Since 1968, when Nora Weeks obtained the original medical licenses for the remedies, our desire to keep the system both unchanged and available to as many people as possible remains the same"

When Dr. Bach presented the remedy system to the world in 1936 it was complete and needed no modification. Before he died, Dr. Bach destroyed all his previous notes, leaving only his finished work. He was determined to keep it simple and unfettered. Nevertheless, there have been numerous books written and many supplementary theories postulated since his death. It is important to remember that Bach Flower Remedies do not need to be complicated, interwoven with other therapies or further developed, the system really is just very straightforward, very effective, and was given to the world complete. The Bach Centre is the custodian of the simplicity of this method of healing, preserving the original methodology as discovered by Dr. Edward Bach. There is no better place to seek advice.
www.bachcentre.com

"The Medical Discoveries of Dr. Edward Bach" by Nora Weeks
The Bach Centre website www.bachcentre.com
The mind of Mrs O

Book a consultation with Mrs O

It really is true! Having used the remedies myself I was so impressed that I trained to become a Bach Flower Registered Practitioner in 2006, and have been offering private consultations ever since.

The Bach Centre maintains an international register of practitioners who have all been trained to the Bach Centre standard of knowledge and experience. All practitioners on the register use the original and simple consultation methods of Dr. Bach. We have all promised to adhere to the Bach Foundation code of practice which requires us to lead you, eventually, to self help. Just as Dr. Bach envisaged. A Bach Flower registered practitioner will guide you to work out for yourself which remedies to select and why, and at the same time will strive to pass on their knowledge of the remedies, helping you to understand how to choose them for yourself in the future.

I would hope to have you up and running and selecting remedies for yourself after 3 or 4 sessions.

get in touch e: gillian@mrsosbornerecommends.co.uk